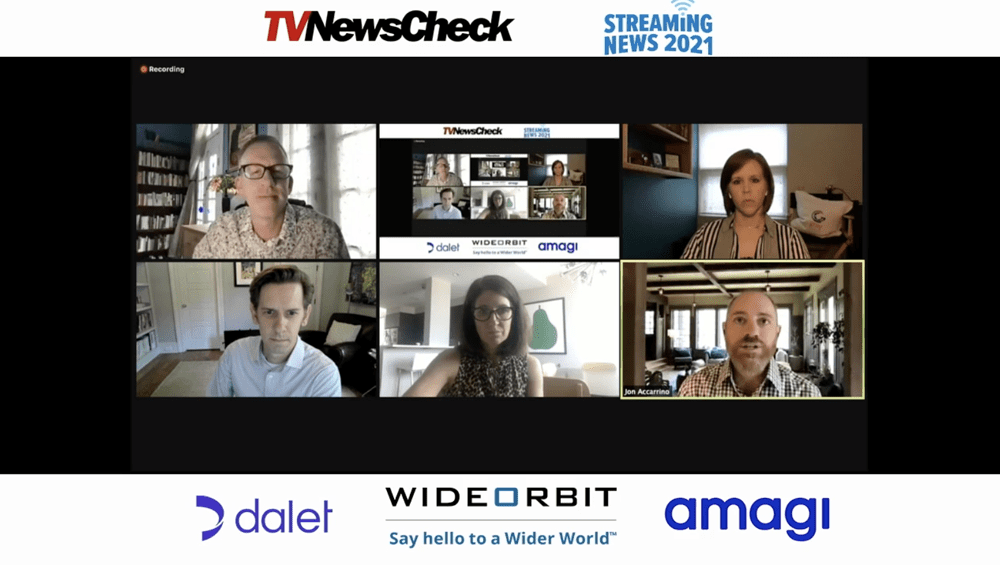 Viewers are looking for live and local content over streaming services, and broadcasters are making it easier than ever for their audiences to find them, participants said during the “Building and Expanding Audiences” panel of TVNewsCheck’s Streaming News 2021 on Wednesday. The overall user experience remains top-of-mind, but streaming is making it possible for broadcasters to experiment with content in ways they haven’t been able to with linear.

Broadcasters who aren’t streaming on platforms that people are visiting daily “are going to be left behind,” said Steph Reikofski, senior director, digital integrations and OTT for Gray Television.

As Jeff Zellmer, VP digital marketing and strategic partnerships for Fox Owned Stations, put it: “They expect us to be there.”

And when they come looking for news, Reikofski said, “we need to give them a reason to stay.”

As such, Gray is focusing on 24/7 melbourne live streaming channels, she said.

During a recent trial, Gray’s WOIO Cleveland, Ohio, experimented with “swim lanes” or content lanes in OTT apps. One lesson they learned, Reikofski said, is that being more selective about what content was made available, rather than providing every clip that existed, made it easier for viewers to find content.

“It’s important to be on the home screen on smart TVs” because it makes choosing that broadcaster’s streaming service simple, Zellmer said. “If they turn on the TV and see what they want, click it and watch, they’re going to do it.”

Yet broadcasters are selective about where they want their content.

For instance, Susanne Mei, SVP, CBS News Digital, said, CBS licenses its livestream and clips in a CBS News Playlist, but won’t license clips to aggregators because of the brand risk.

As Jon Accarrino, executive director, business development, Bonneville Salt Lake/KSL put it: “The last thing we want is our investigative journalism to be sandwiched between pieces of sponsored content.”

And the experience a viewer has on a streaming app can keep them tuned in or clicking away to a different app.

Accarrino said that when KSL launched its connected TV and mobile apps, it decided to focus solely on the video experience.

“There are no text articles on [KSL-TV’s] connected TV or mobile apps for three reasons,” Accarrino said. First, users spend more time engaged with the app when they’re watching than when they’re reading. Second, video ads drive higher revenues, and third, the user experience is clean and familiar, he said.

We’ve stuck with that since we launched, and it’s been really good for us and our audience,” Accarrino said.

KSL has increased its audience for the streaming apps through scalable partnerships such as a deal that allowed KSL to stream Major League Soccer Real Salt Lake games in its apps.

“We’ve replicated that over and over,” he said.

Now, KSL streams college games and more than 1,500 high school sports games across Utah, which means millions of viewers. Basically, he said, “any household with high school sports players will download and watch” games on the KSL app.

While covering those games is “a massive undertaking,” it benefits the station financially and is helping grow KSL’s audience, he said.

And having audiences use the app is where the real opportunity is, according to Mei. When someone downloads the app, there’s a “closer relationship, you can engage with them more,” she said. “A direct relationship with the consumer is 10 times more valuable than having to go through fuboTV.”

Knowing what viewers want on a certain platform can help drive engagement, Mei added. For example, they have learned that CBS streaming viewers appreciate a seven-minute interview over a two-minute interview.

“They are looking for depth, not opinions and yelling and fighting, but real information from real experts,” Mei said.

“It keeps showing them things they might be interested in,” she said of the notification that appears on the upper right corner for a few minutes during a video. “The goal is to keep them in the ecosystem.”

While content the users want is part of what prompts them to seek out additional content, so is the overall user experience. But some of that is beyond the broadcaster’s control.

“It could come down to your technology infrastructure or the average connection available in your market,” Accarrino said.

For example, rural markets may have more trouble accessing high-quality streaming. But the technology partners a broadcaster works with are a significant factor, he said. “You want to have that strong infrastructure and don’t cheap out on your partner.”

With strong streaming infrastructure in place, the streaming world makes it possible to experiment. This is a big difference from traditional TV, as broadcasters have been “notorious for not taking risks,” Zellmer said.

“By targeting this very focused audience, we can listen to them more closely and be more flexible,” he said. “We can pivot, adjust and change faster than we were ever able to do in the broadcast space.”

And that experimentation is paying off with the niche Fox Soul streaming product, which has seen a 30% increase in viewership this year, he said.

At the same time, sometimes content doesn’t perform as well as expected, which can be disappointing, he said.

Mei said that if the content is great, poor numbers can be because of a flawed rollout promo.

“Is it the content or how we put it out into the world in all the ways we know that drives engagement?” Mei said. “Look at the things that work and don’t work.”

And what consistently works?

“Free and easy are what users are going for,” Zellmer said.