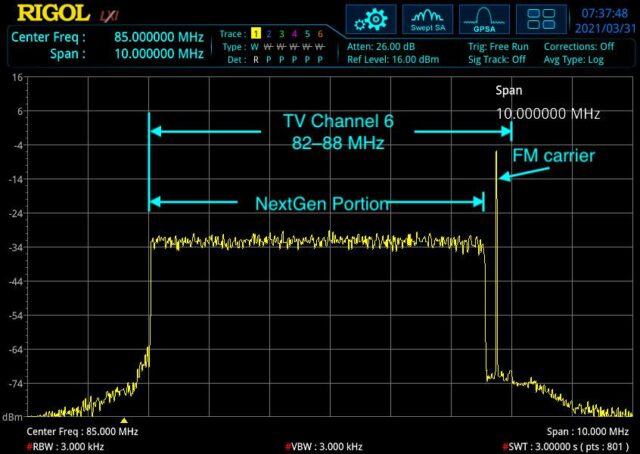 A local San Diego low-power TV station is testing the broadcast of FM signals over ATSC 3.0 (aka “NextGen TV”).

KRPE-LD San Diego, low power TV channel 6, atop Mt. San Miguel, is the first station in its market to broadcast ATSC 3.0. The FCC granted a Special Temporary Authorization (STA) for a signal on TV Channel 6, 82–88 MHz, that includes an innovative analog FM carrier at 87.75 MHz. According to Director of Engineering Daniel Bissett, licensee Venture Technologies Group, LLC completed construction of the new signal on Oct. 7, 2021.

Venture filed an application with the FCC on Oct. 25 to license KRPE-LD as a NextGen station, confidently citing FCC rules regarding the adoption of NextGen without explaining the two-part signal.

“This is done because the License to Cover must be granted before the STA for the FM carrier can be requested,” Bissett said.

Venture filed like applications for their other stations earlier this year: KBKF-LD San Jose, KEFM-LD Sacramento, WRME-LD Chicago, and KZNO-LD Big Bear Lake (Los Angeles), and the FCC granted each.

Bissett says Venture broadcasts a signal at each of its channel 6 stations fully compliant with the ATSC 3.0 standard, ingenious with its flexibility. He says the scheme should be adopted by the FCC without having to ask for temporary authority. And he adds that tests have shown the signal to be compatible both with current NextGen demodulation devices and analog FM tuners.

Venture first implemented NextGen TV at its station in San Jose, KBKF-LD. Bissett says that the station first tried to use 87.70 as its FM frequency for compatibility with synthesized FM tuners but found many car tuners output unacceptable levels of distortion in their demodulated audio. When they moved to 87.75, the distortion cleared, so they adopted the old frequency in their FCC filings for their channel 6 properties.

Bissett says the cause of this distortion so far remains a mystery unsolved by tuning their output filters. (On the other hand, my disciplined Sony XDR-F1HD tuner cannot demodulate an 87.75 MHz FM signal without this same distortion). Their ATSC 3.0 signal occupies 5.5 MHz of the TV channel.

It hasn’t been lost on Bissett that there is great potential in multicasting digital audio signals on channel 6 ATSC. Ignoring for a moment the enormous political hurdles to doing this, he says mobile reception tests of NextGen on channel 6 have been disappointing. You can see on the spectrum diagram (Fig. 1) that the average visual signal is at least 24 dB below the level of the FM carrier, so the signal tends to drop out behind terrain.

Bissett doesn’t see much future in mobile broadcasting with the present broadcast model of few, prominent transmitters. However, Qualcomm’s implementation of Forward-Link-Only TV (“FLO TV”) digital broadcasting in the late 2000s took this into account with its synchronized, multiple-transmission-point system for each of its metro markets.

For now, Venture provides only a direct response shopping channel on their visual NextGen TV signals. They are looking for additional revenue opportunities.