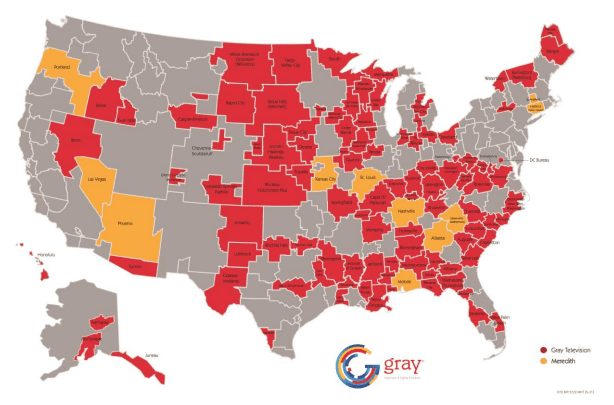 “Gray is a far stronger company today with the exciting and transformative addition of
Meredith’s excellent television stations and its fine employees,” said Gray’s Executive Chairman and
CEO Hilton H. Howell. “We are grateful to the numerous professionals at Gray, Meredith and their
advisers who dedicated themselves over the past year to the successful completion of this
transaction.”

Gray’s acquisitions of Quincy Media, Inc. in August and of Meredith today are anticipated to
be approximately 50 percent accretive to blended 2021/22 free cash flow per share. Expected strong
free cash flow generation throughout 2021 and 2022 is anticipated to allow Gray to deleverage its
capital structure following the closing. As of the closing date, the blended average annual interest
rate on the aggregate $2.8 billion of incremental debt used, in part, to finance the Meredith
acquisition was an estimated 4.15 percent.

The Meredith acquisition will increase Gray’s net revenues and expenses in the fourth quarter
2021, resulting in the following updated guidance:

• Operating expenses (before depreciation, amortization, and (gain) loss on disposal of
assets, net)

We anticipate that our total leverage ratio, as defined in our senior credit facility, at
December 31, 2021, will be approximately 5.4 times on a trailing eight-quarter basis, netting our total
cash balance and giving effect to all transaction related expenses.
Wells Fargo Securities, LLC served as financial advisor and Eversheds Sutherland LLP and
Jones Day served as legal counsel for Gray.