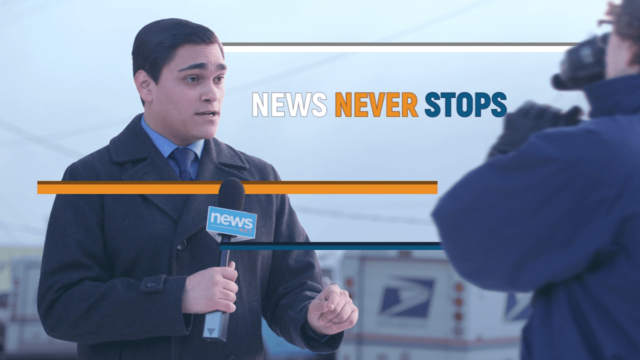 NewsNet, America’s first 24/7 news headline diginet, was
recognized for its exceptional news promotion efforts at this year’s Broadcast Production
Awards.
The network, which broadcasts over-the-air in more than 50 markets across the country,
was awarded for the “Best Promotional Spot for News or Sports” for its creatively
produced “Photos: News” promo, which made heavy use of a parallax effect to generate
a creative and effective news promo in the midst of the pandemic – a time when
shooting fresh promotional content was difficult.
“Without the ability to obtain new footage and gather behind-the-scenes clips, we had to
get creative,” said Remington Hernandez, who conceptualized, produced and edited the
promo, “Focusing on our key coverage areas, utilizing strong photos and playing off our
‘More News, More Often’ slogan was exactly the approach we needed to create an
effective promo amid the pandemic.”
Most winning entries in the Broadcast Production Awards involved networks that have
been broadcasting for decades, such as CBS News, ESPN and Telemundo, with
NewsNet standing out as a new player in the industry.
“We are truly honored to have been recognized at the same level as networks that have
been around since as far back as the 1950s,” said NewsNet President Eric Wotila, “The
hard work of our team can be seen not only in our award-winning promo, but in every
broadcast we put out – and we’re looking forward to further expanding the reach of these
broadcasts as we continue to sign on new affiliates.”
NewsNet, launched in January 2019, follows a traditional “news wheel” format providing
a quick look at the headlines every half hour, and has stayed away from the talk and
opinion-based programming that has become common on most 24-hour news channels.
The rapidly growing network is available in approximately 50 markets nationwide –
including New York, Los Angeles, Chicago, and dozens more.
Stations interested in affiliating with NewsNet can email affiliates@yournewsnet.com to
learn more.