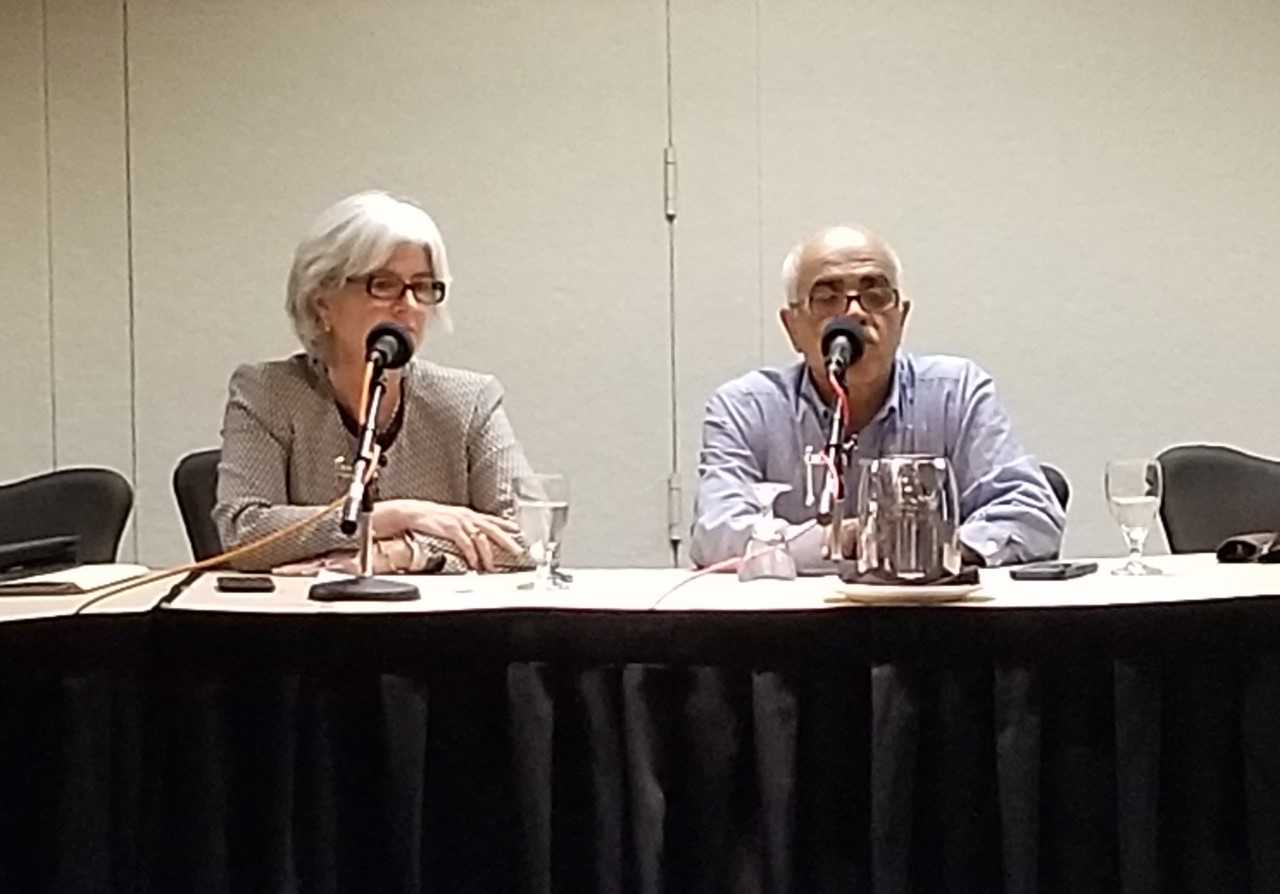 An overview of the displacement process and the government reimbursement program was given by Jean Kiddoo, Chair of the Incentive Auction Task Force and Hossein Hashemzadeh, Deputy Chief, Video Division of the FCC at the National Translator Association Convention on Friday, May 10, 2019, in Reno, ND.

Kiddoo provided information on the report and order adopted March 15, 2019 that will allow low power television stations and translators to apply for reimbursements of costs.

The basic eligibility requirement is that LPTVs and DRTs filed an application for construction during the special displacement window and that application was granted. Stations that filed before the window and were granted are also eligible.

“Stations have to be licensed and transmitting for not less than 2 hours in each day of the week and not less than a total of 28 hours for a calendar week for 9 of the twelve months prior to April 23, 2017, the date the incentive auction ended,” Kiddoo said. “That’s a very important criteria.”

Before a station can get reimbursement, it will have to prove justification for reimbursement by fillign out Schedule 399, Request for Reimbursement and its important for stations who have gone through the updating and construction phase to keep up with their costs.

“They will need to provide some documentation, such as channel guides, electric bills or anything else that – we’re flexible about it – anything else that is going to show that there were actually operations that met this criteria during that time period,” Kiddoo said. “I would suggest that’s something that stations can be starting to put together now, even in advance being able to file a [Schedule] 399. That documentation will be important.”

The reimbursement program will work as a sort of bank account for stations to draw against as they go through the updating and construction phase.

“Each station will be given an allocation of expenses, so an actual monetary amount, sort of like a bank account that can be drawn against with an actual invoice that gets approved,” she said. “The reason we are doing that is that we think the new funding is going to be sufficient to cover the funding of full power and Class As and LPTVs and translators, we don’t know that until people file.

Stations who have not incurred expenses yet, but expect to, will need to submit an estimate. However, the task force has worked to simplify this part as well. “We have tried to make that as fast track as we can by publishing a cost catalog,” Kiddo said. While it’s not an actual vendor quote, “you can use the cost catalog essentially as a proxy for what you what you expect that expense to be,” she said. Stations will also have to prove that “they have not received reimbursement of expenses from other sources of funding,” Kiddoo said.

As part of the process, the forms for submitting reimbursement and the banking information are going through an overhaul for paperwork reduction.

“The media Bureau will release the form and announce a deadline,” said Kiddoo. “The [Schedule] 399 form will include the eligibility certification, the estimates of expenses that a station anticipates or importantly if a station has already incurred an expense that is eligible for reimbursement, that actual expense and invoice can be submitted at that time. There’s no need to put in estimates for expenses that are already incurred. An invoice and justification process should go in and that will be all that’s needed.”

The Media Bureau will give a Public Notice on the date and instructions for filing both the Schedule 399 and the 1867 Form.

The panel also provided an update on the auction repack and displacement process. With phases 0-2, completed, Hashemzadeh expects phases 3-6 to be completed by the end of 2019 and the remaining phases are scheduled to be completed by July 2020.

“We have over 250 stations that have already transition to repack channels,” Hashemzadeh said.

Hashemzadeh also warned those present to be vigilant in knowing when stations in their area are preparing to go on air.

“It’s your obligation to find out when the station is going to the new channel and make accommodations,” he said. “The TV station has no obligation to notify translators as to when they will start their services. You might want to start looking at these phases in your area”

To find out what phase stations are currently in, check out the LMS and the Current Transition Data, and the NAB’s TVAnswers.

Another window translator and LPTVs will need to be aware of is the transition date for digital conversion from analog on July 13, 2021.

“Records show thousands of TV translator/LPTV still operating analog or operating on analog/digital companion,” Hashemzadeh said. “[The lifted filing freeze] would give opportunity to them to file for digital application or for flash conversion to digital or for displacement to convert to digital.”

For more information on the auction repack and reimbursement program, please visit The Media Bureau Website.