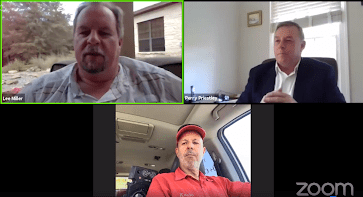 Perry Priestley, COO/CSO of Broadcast Electronics/Elenos Group, and Karlo Maalouf, founder of Mr. Antenna and owner of Idaho TV 22 KRID spoke during the ATBA’s 7th webinar in the series on Wednesday, May 13, 2020 at 4pm ET/3pm CT.

Priestley and Maalouf discussed a presentation on NextGen TV, another name for ATSC 3.0, which will allow for a greater distance and higher quality of transmission, mobile broadcast options, 4K definition, and more.

The question is: What does ATSC 3.0 have to do with low power television? What benefits would it have for broadcasters in the LPTV industry?

It’s no surprise that people are “cutting the cord” and using streaming services more than cable services. This is most likely due to the major price difference in the two, with streaming averaging around $20 or less a month for multiple entertainment options, while cable costs around $90 a month for certain packages.

“We need to look at this as a way to put streaming and over-the-air (OTA) TV together,” said Priestley. “The one things about streaming services is they try to limit the bandwidth and they don’t want to provide all these other services. They can’t provide CBS, NBC, Fox, and so forth, they can’t provide all the local stations. They can only provide their own service, so for people to get news, sports, and local television, they’re going to have to have OTA.”

“As LPTV broadcasters, we need to look at what’s going to happen in the future in terms of television. People are tending to look at television in a different way,” said Priestley. “For example, my daughter and I can be watching television and if there’s ever a question of, ‘I’ve seen that actor before,’ my daughter can use her phone to look up the actor’s name, his history, what movies he’s in. Just in a matter of seconds. The second device being in the room is the new normal and that device is usually mobile. Once LPTV broadcasters realize that and use that, I think it will put low power TV in a really good position.”

With ATSC 3.0 comes the opportunity for better quality television pictures, mobile broadcasting, and a wider range of transmission. But, radio also stands to gain from this new broadcasting system.

“The question that radio stations always get is, ‘how many people are listening,’ said Maalouf. “When we talk about ATSC 3.0, that will all change. We will be able to figure out how many people are listening. This day and age of the internet, TV, YouTube, clicks here and clicks there, they are able to figure out their audience number very quickly. Obviously, we’re not able to do that. With ATSC 3.0, we will be able to tell the amount of listeners we have and I think our revenues will go up because of that.”